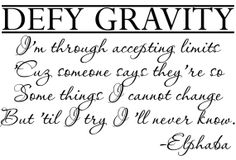 The other day I was telling a friend that the soundtrack to the musical “Wicked” was the soundtrack to my life. It may or may not be a bit of an exaggeration, but two lines in particular resonate the most with me: “I’m through accepting limits, ’cause someone says they’re so. Some things I cannot change, but ’til I try, I’ll never know.”

Back in the summer of 2004, I took a trip to New York City. I saw the Statue of Liberty, Ellis Island, the American Museum of Natural History, the Guggenheim, went to the top of the Empire State Building, and so much more. It was a fantastic week. I also went to see “Wicked” on Broadway, with much of the original cast, including the incredible Idina Menzel. (brag, brag, brag).

This wasn’t just a random trip to New York. While it was a trip I’d always wanted to make, I had decided to go to New York because I didn’t get in to the Odyssey Writing Workshop. I’d made the waiting list, but not in to the actual workshop. I’d thought that was it, whatever, I’ll cheer myself up with a great vacation.

I’d been in a rough place for some time. I was nearing (if I wasn’t already) clinical burn-out at my job, I had no social life to speak of, and my writing was just not happening. I was tired of it. I was tired of being tired, and of failing to live the life I wanted to live, because I was doing what was expected of me. To say I felt stuck was an understatement. I needed to get out. Hearing those lines “Some things I cannot change, but ’til I try, I’ll never know,” stuck with me. I could relate. I needed to at least give change an honest try.

I gave myself 1 year to make things happen; to change my job, and to take my writing more seriously.

A few months later, I was given the opportunity to work in Northern Ireland for a year. It was a dream come true. As I was preparing for Northern Ireland, I received a reminder of the application deadline for Odyssey. I hadn’t intended to apply again, but since I was already leaving my job, I decided “why not?” I could just leave work a few weeks earlier than planned. That summer, I got into Odyssey.

Big changes were happening. They were happening because I was committed to making them happen. They didn’t come easy. Sacrifices had to be made. I had to sell my condo to be able to afford to go. I had to give up my pet bunny, I had to leave my family, in particular my young nieces and nephew whom I adore.

Last week I asked you how committed you were to achieving your writing goals. It can be easy to say your 100% committed, that you’ll spend every waking minute on your goals, or to writing 1 word a day, every day. But unless something changes in your daily routine to make that time, it doesn’t matter how committed you are, it still isn’t going to happen.

How much are you writing now? How much would you like to be writing? What is the difference between the two? What needs to change to get to where you want to be?

I’m going to throw in a caveat here. We’d all like to quit our day jobs and write full-time. Unless that is truly financially feasible for you right now, let’s assume that it isn’t and it won’t be for a few years. So think about what needs to change without quitting work.

I’d love to hear where you’re at and where you’d like to be. Join the conversation!

3 thoughts on “Until you try, you’ll never know”